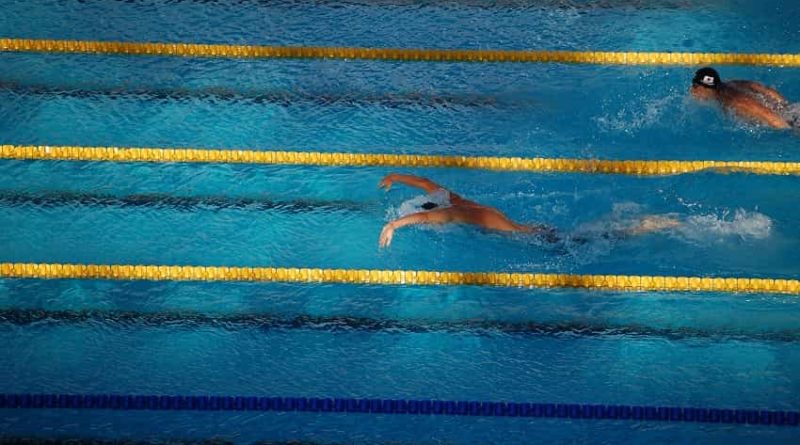 The tongue. The sneakers. The titles.

Like countless others, my bedroom wall was plastered with Michael Jordan posters. Every year I begged and begged for a pair of Air Jordans for Christmas. In the driveway, I would do reverse lay-ups and fadeaway jumpers with my tongue wagging out of my mouth, imaging myself hitting a game 7-winning shot, just “like Mike.”

Jordan’s career—the scoring titles, MVP awards, the endless records and statistics—is well documented. But more recently, his mindset and approach to the game has found a broader audience with ESPN’s wildly popular The Last Dance.

There are plenty of lessons that swimmers can pull from the basketball GOAT.

Here are a few that struck me while watching The Last Dance and re-reading a few of my favorite books about Jordan.

Welcome moments of discomfort and pressure.

Something excellent happens when you make a habit of chasing discomfort in training: the fear you have of high-pressure situations evaporates. Because you welcome adversity, discomfort and intensity on the regular in training, when it happens in competition you can perform at a high level.

You mentally get out of your own way when you don’t get caught up with what the moment “means.”

George Mumford, a former basketball player and author of The Mindful Athlete, worked with Jordan and the Chicago Bulls during the 1990s.

And one of the things he noticed about Jordan was how comfortable Jordan was getting out of his comfort zone.

Jordan was relentless in practice, pushing himself and his teammates. The goal? To make the game the easy part.

In practice, it’s normal for a swimmer’s concentration to waver under fatigue. Or to pull short because hey, it’s just one swim practice, and there will be another one tomorrow.

But training is where your performances in competition are being forged.

Coasting through main sets, or pushing only when you “feel like it” doesn’t prepare you for the stress and pressure of race day, where you performance falls to the level of your preparation.

Seek to make practice harder than competition. Racing should be the “easy” part.

Roland Lazenby, in his comprehensive biography of Jordan, Michael Jordan: The Life, details Jordan’s first few weeks as a freshman at the University of North Carolina, where he sought out one-on-one battles with James Worthy, who at the time was the best player on the team.

While the term “bully” understandably rankles in today’s day and age, replace that word with challenge.

Use the underdog mentality to stay hungry.

Jordan, as viewers of The Last Dance can attest, searched for any slight, any nugget of motivation, to fuel himself through the grinding climb towards title after title.

He would manufacture chips on his shoulder if that is what it would take to get himself mentally prepared to dominate.

Other times he didn’t need to use his imagination, using the naysaying of others. One of the tools that champions like Jordan use to stay hungry is utilizing this underdog mindset.

Jordan’s late father, James, in episode two of The Last Dance recalls how Michael would use the naysaying of others as fuel.

Champions are forged in the dark.

We all crave the moments of glory and the accolades when everyone is watching. The recognition from others is a powerful and motivating force.

But wanting to be recognized as a champion when everyone is watching is easy. It’s doing the work in the dark that is the hard part.

How do you swim when coach isn’t watching? When you don’t have anyone breathing down your neck, do you swim with excellent technique? Swim into the wall like a champ? Do you succumb to your worst impulses when no one is on you to do the right thing?

Behave like a champion, even when no one is watching.

Excellence is a mindset, not something you do when you feel like it.

In Jordan’s book, Driven from Within, Jordan talks about his devotion to excellence. There was no off switch—every practice and every game was to be done at his best.

He had a fierce and unrelenting commitment to performing at his very best no matter what. Always. That was his standard.

On days where you are tired, or you aren’t feeling your best, it can be tempting to give less than your best. Your technique falls apart a little. Your turns are sloppy. You coast into the finish at the end of each rep.

Excellence doesn’t mean you necessarily beat the swimmer in the next lane every time; it means you bring your best effort—whether it’s a chill drill set early in the season or the hype anchor leg at your big championship meet—every time.

The ultimate definition of winning is doing your best every single time you step out onto the pool deck. How you end up placing and the results take care of themselves.

This kind of commitment makes excellence habitual, the default, something you just do. You can imagine the kind of results that will consistently spring from this kind of attitude.

Practice in a way that generates confidence.

Jordan’s unrelenting work ethic helped him to play “clutch” when the game was on the line. The game winning shots were simply an extension of the work that he had done in practice.

By preparing himself to the utmost, he was ready for anything. He had nothing to fear. By sharpening himself in practice, he was also sharpening his confidence for game day.

When you do everything you can to get better—sleep like a champion, eat for performance, take advantage of all the training opportunities available to you, push your limits day in and day out at practice—confidence flows naturally.

You don’t need to fake feeling confident. Because you’ve earned it.