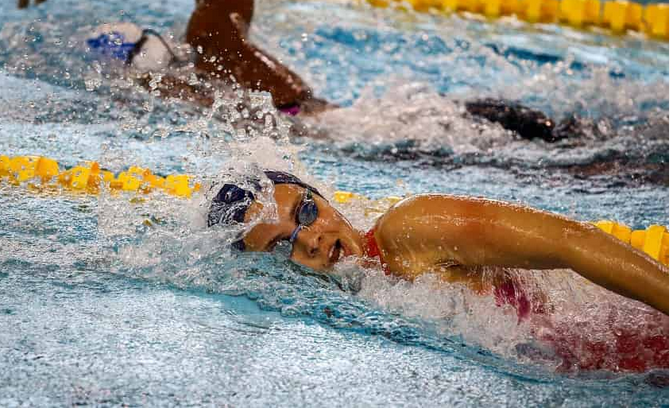 Training & Nutrition
July 4, 2020July 4, 2020 Neville Smith 147 Views 0 Comments How to use motivational self-talk to boost performance in the water

One of the basics of developing a high-performance mindset in the water is self-talk.

How best to sum up self-talk?

It’s the narrative that you keep with yourself while bouncing from lane rope to lane rope, standing behind the block, and while in the throes of an endless number of 100’s best average.

For better or worse, self-talk is the language you use with yourself that ultimately decides how much effort you put forth, how you react to adversity, and how fast you end up swimming.

The problem for a lot of swimmers is that their self-talk remains largely untethered and undisciplined.

How often have you told yourself a practice was too difficult? Or been deflated when a teammate passed you during the main set? When you are standing on the block getting ready to race and you look over at the swimmer in the next lane, does your inner monologue project confidence or does it play down your strengths and abilities?

One study [1] of competitive swimmers found that a ten week program centered around self-talk helped swimmers improve nearly 1.5% faster compared to their teammates.

This is the power of better self-talk.

What kind of self-talk should I use?

Self-talk comes in a couple different flavors, and the one you are probably most familiar with is motivational self-talk. It’s when you use your inner narrative to get all fired up before a big race, hard practice, or give yourself a quick blast of energy:

Research [2] has found that motivational self-talk is the more helpful of the two when it comes to boosting strength and endurance.

The benefits of being able to persevere longer during stretches of adversity should be obvious: You will learn first-hand that you are tougher than you think. You will become mentally tougher. And you will take a more aggressive approach to adversity.

Here’s how to implement more motivational self-talk into your training.

Write out the self-talk you want to use during moments of adversity.

Self-talk shouldn’t be left to chance. Sit down and think of the times where you give up or crater the most mentally and write out quick bursts of self-talk to keep you positive.

Don’t shrug off this exercise—its power comes in giving you the chance to decide ahead of time how you are going to react when things get tough instead of being a victim or bystander.

For more kinds of self-talk, look back on times where you used self-talk to your advantage. What did you tell yourself to keep going? What were the lines/sayings/mottos that helped push you through when things were tough?

Motivational self-talk works when we attack things in chunks.

Instead of trying to positive self-talk your way through all of them at once, focus on the first rep or two.

“I can totally do a couple reps at max speed,” you tell yourself. Once those two are done, repeat. Over and over—the more focused and engaged you are in the present the “easier” the set becomes. It’s when we start thinking into the future that our brain rushes to pump the brakes on our effort.

Motivational self-talk, in a sense, is a continuing negotiation with yourself to not give up.

Put your self-talk front and center.

Remember the study of competitive swimmers that I mentioned earlier? One of the things the researchers did with the swimmers was to have each athlete write out their self-talk onto their swim equipment so that it was at the end of the lane each day at swim practice.

Writing out things like, “Don’t give up!” on your water bottle and seeing it countless times provides your brain a continuous stream of signals of what your expectations are.

Don’t underestimate the power of showering your environment with cues and signals of what you want from yourself.

The self-talk you use should be predominantly positive: I can do this. I am going to dominate this set. Hulk smash! When our goals and our self-talk take a turn to negative town we become prevention-focused instead of promotion-focused.

You’ve likely used self-talk that is seasoned with a prevention-focused tone: Don’t lose the lead! Don’t lose this race!

The problem with this kind of self-talk is that it starts from a position of loss, rather trying to win. Subtle difference, but it’s the difference between swimming to win and swimming to not lose.

While negative self-talk can work in some instances, I’d recommend that when building a library of self-talk that you focus on building performances instead of trying to save them.

Grab a sheet of loose-leaf and design yourself some self-talk to help you crush those hard swim practices. Don’t overthink the sentences you use—the shorter the easier they are to remember and implement.

Self-talk is something you should be working ion every day in training, a tool that you can sharpen and come to lean on when you need to tap extra reserves of mental toughness and focus.