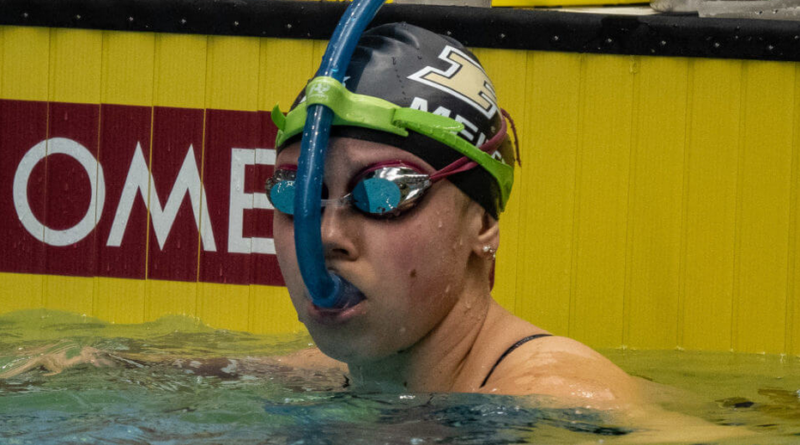 In swimming, the little tricks and hacks learned over the years are an essential part of the sport. When swimmers face their first official swim practice, it may be stressful for them: Figuring out how to get a cap on, understanding circle swimming, and figuring out the structure of sets, are all initially overwhelming obstacles. However, years later a swimmer will cycle through an entire practice without a second thought toward such tiny tribulations. So what are some of those special abilities that most experienced swimmers can claim?

It’s hard to describe just how difficult it is to put on a kneeskin unless you’ve experienced it. It’s one of the skills that seems like it should get easier with time, but really it’s just nearly impossible no matter how many times you’ve squeezed yourself into one. Luckily, there are little hacks that swimmers do to make the process a tad easier on themselves. Sometimes when pulling on a tech suit, it can literally tear the skin off of fingers. One way some swimmers combat this issue is by putting vaseline or something similar onto their knuckles. There are other little things that help to ease the process: Crossing your legs can give a few inches, and of course, you could perform the classic hokey-pokey dance paired with some squats to speed up the pace.

Getting Water Out of Ears

Anyone who has been swimming a few times has probably faced the universal experience of not being able to get rid of the water sloshing around in their ears. Because swimmers face this daily, they’ve been forced to devise solutions. One such fix is to use rubbing alcohol as a way to evaporate the water (and also fight swimmer’s ear!). If there is no rubbing alcohol lying around the house, shaking your head vigorously to one side can also do the trick.

Though we are all taught it early on in school, counting coins can be confusing for some. Swimmers, however, have a lot of practice skipping around with numbers like 25, 75, 150, or even 1600. If you need to know how many quarters make up $5.00 in a pinch, it would be handy to have a swimmer around who knows there are 20 laps in a 500. Still, there’s always a chance a swimmer could be part of the sport for years and be no better at math than when they started.

Getting Permanent Marker off Skin

Something swimmers do when they have a lot of events at a meet is write down their event, heat, and lane. So they don’t forget or lose that information, the most convenient way to write it is in permanent marker on their hand or arm. Writing in this fashion comes with the issue of getting it off their skin before they have to attend school the next day and face questioning from curious classmates. For summertime and outdoor meets, sunscreen can act as an efficient Sharpie eraser. During the winter when sunscreen isn’t readily available, rubbing alcohol or makeup remover also can get the job done when soap and water fail.

Maintaining your equipment bag that sits on the dirty pool deck can be a tedious task. However, there are some little life hacks in this department as well. Paddles can be known for their pesky straps that often snap. Instead of ordering a whole new set of paddles when this happens, it can be handy for a swimmer to keep a supply of surgical tubing around as a replacement. Snorkels are another piece of gear that need quite a bit of attention. It’s important to keep snorkels clean, but because they’re so awkward to wash, often swimmers conveniently forget about this task. Fortunately, it is actually possible to just throw those snorkels in the dishwasher to get rid of possible bacteria or other grossness. Keep those lungs clean!

These are just a few swimming hacks of many. If there are others, you may just need to miraculously discover them yourself. Make sure to share with friends and teammates when you do!