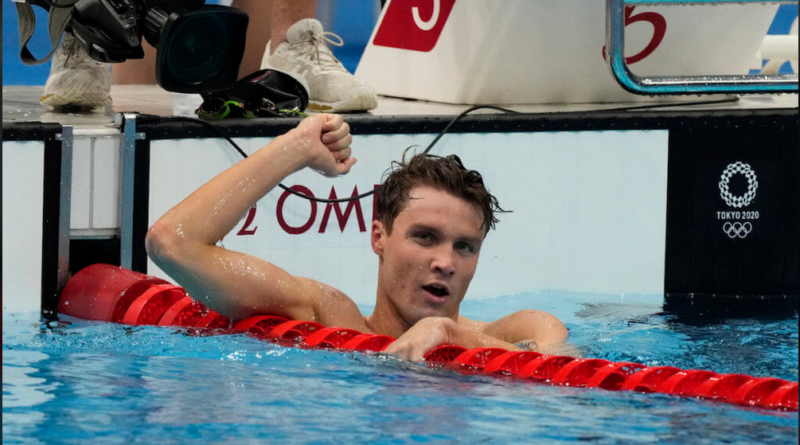 Racing to get your hand on the wall first can come down to a hundredth of a second, even in distance races. Swimming distance races requires some strategy to execute a successful race. To ensure a strong performance, distance swimmers are highly in tune with their bodies so they know their pace at any time in a race. Here are a few different ways to strategize for an upcoming distance race.

While winning from behind is not the most methodical plan of attacking a distance race, it certainly is fun. With this racing strategy, a distance swimmer will build through their laps, getting faster as the race proceeds. Building can take a few different forms from increasing speed by 100s, or just going faster in the second half of a race. If a swimmer chooses the latter, they are negative splitting their race. To negative split a race, a swimmer’s splits will be faster in the second half of the race than the first half. To win from behind, a swimmer must have a big burst of speed at the end of a long race.

Over the course of the Tokyo Olympics, swim fans got to witness some impressive back-half swims. University of Florida distance swimmer Bobby Finke dropped some impressive splits in his decision to sprint the ends of his races. In his gold medal winning 800 meter freestyle (7:41.87), Finke came back in a split of 26.39 for the final 50 meters. Then again in the 1500 meter freestyle,  he blasted a fast 50 meters to get his hand on the wall first. In the 1500 freestyle (14:39.65), Finke’s last split was an insane 25.78.

Another Tokyo Olympian who used a building technique was Katie Grimes. At just 15-years-old, Grimes was the youngest swimmer to make the U.S. Olympic swim team. At U.S. Olympic Trials, Grimes had an amazing swim in the 800-meter freestyle. Katie Ledecky won the event (8:14.62), but a tight race for second place emerged. Haley Anderson, an open water Olympian, maintained second place for most of the race, but Grimes had another gear left at the end of the race. Grimes sprinted the last 50 meters and passed Anderson to earn a trip to Tokyo (8:20.36).

Out Fast and in Charge

Another distance swimming tactic is to charge from the dive and lead the race. Having a quick reaction time off the start can help a distance swimmer get out ahead of the rest of the field. The swimmer who gets out front gets “clean” water and can set the heat’s pace. A prime example of a distance swimmer who gets out fast and stays out front is Katie Ledecky. After a large event schedule at the U.S. Olympic trials for the Tokyo Olympics, Ledecky prepared for her last race, the 800-meter freestyle. In typical Ledecky fashion, her first 150 meters were under her own world record pace. Ledecky fell off the world record pace, but by going out fast she was able to win by almost six seconds.

A great focal point in distance swimming is to focus on your entry into your turn. The first part of a fast turn is having a good approach into the turn by not breathing into the wall. As your feet rotate over, ensure that you have a good foot plant on the wall. Once you push off the wall get into a tight streamline, kick a few strong dolphin kicks that transition into fast flutter kicks, and have a strong breakout without a breath. The cleaner and better your turns are in a distance race, the more time you save. In a 1650-yard freestyle race, a swimmer has 65 opportunities to have good turn technique. Be sure to take advantage of your turns as you can make up time without expending a lot of energy. By focusing on your turns, you can carry your momentum in and out of the walls. With the continued momentum, your speed continues, and you are more likely to stay on pace. One of the best feelings is flipping next to someone, but then breaking out before them, due to your control around your turns. In your next distance race, be sure to utilize your turns as an advantage for maintaining speed.

No matter what strategy, or combination of strategies, works best for you, remember to swim in your own lane and stick to your own plan.